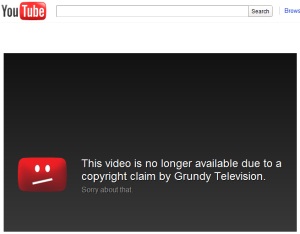 Television and movie companies love their copyright, rightfully so – they’ve invested a lot of time, money and energy into producing something. Unfortunately, in their rush to protect their copyright, they often stomp on a thriving community which is actually advocating their brand and product.

Case in point, back in 2006 when Bobby Flynn was on Australian Idol I posted a number of links on my blog to excepts of the television episodes that’d be recorded and uploaded onto YouTube. Those clips have existed on YouTube, copyrighted or otherwise now for a number of years, received hundreds of thousands of views, all of which help build and reinforce the brand Australian Idol, but only now, years later does anything happen with it.

YouTube were clearly given a legal letter from Grundy Television to remove the copyrighted material from their site, which they of course obliged. The thing is though, Grundy Television don’t provide a comparable service – if they did, everyone online that wanted to talk about how positively amazing Bobby Flynn was, would have linked to their excepts of the show with him singing.

I see these sorts of actions from television and media companies to be rather short sighted. People online wanted to discuss the different contestants from Australian Idol, re-watch and live their performances & the TV companies should be elated about that fact. It could be worst, much worst, everyone could be completely bored with the format, show and what it has to offer and be on Facebook instead – but they aren’t, they are actively seeking out information and videos about artists from their show.

If I were in their boots, I’d be setting up an Australian Idol channel on YouTube and uploading every song of every contestant from the first series to the latest. Then I’d start uploading interviews with each of the contestants, then the judges and more. All branded with the appropriate network logos and product placements. They’d then be in a position where they can control, more or less, what gets published online and since their is an official channel on YouTube – the enthusiastic viewer doesn’t need to upload an inferior qulality recording. All the while, they get to engage with their avid fans and target audience – seems like a win win situation for me.

I understand the copyright side of the fence but what were Grundy Television losing by allowing the songs from Australian Idol to exist on YouTube, the single biggest, most prolific source of video on the internet?