Since I started learning to run again in June, all of the my jogging to date has been in the gym during my lunch hour. By the time I walk to the gym, get changed, stretch briefly, allow time to cool down and get changed again – it leaves me with approximately 40 minutes of exercise time.

I started out doing short test runs of only 1km, increasing to 2km and have since increased my lunch time running distance to a maximum of 6.5km. I noticed that I seemed to be struggling to get past that distance in my allocated time and figured that I needed to learn to run further, sustaining my energy output for longer, to be able to expend more energy in a shorter period of time by running faster.

That lead me to getting up early on the weekend a fortnight ago and embark on a 7.5km run around my neighborhood. I plotted out my running path using Google Maps to provide an estimate of distance and set out at sunrise and returned roughly one hour later.

Considering it was my longest run to date, I think I handled it reasonably well. I learned a valuable lesson along the way, take notice of the road names and make sure you enable terrain view in Google Maps. Without realising it, one of the roads I ran had the word ‘mountain’ in it and I can now confirm with absolute certainty that jogging up a 10% incline is really hard work!

Following on from the relative success of my 7.5km jog, last weekend I decided I’d see if I could go a little further but making sure it was a little flatter this time and ended up jogging 9.2km. I was definitely feeling the run towards the end but to my surprise, Runkeeper reported that I had a fairly consistent pace of 6:40s per kilometre.

I’m fairly happy with how I’m progressing at the moment, nothing too crazy or daring – just slow steady progress. I figure if I just keep working at it and before I know it, a 10km run will feel casual like a 3km one does now.

During my time at the gym most lunch hours on the cross trainer, I kept eyeing off the treadmills. I’ve been apprehensive about stepping on the treadmills as historically I’ve had a shin muscle issue with walking fast or jogging that’d cause my shin muscles to become completely fatigued, to the point where I can’t even lift my toes to walk heal first.

A little while ago I decided that I’d give the treadmill a go and to my surprise my shins appeared to be fine. A few more attempts at different intensity levels and they still seemed to be okay. I haven’t done anything to specifically address that issue, however since I’ve lost the better part of 10kg now – I wonder if that wasn’t contributing to the problem all along.

After feeling confident that my shin muscles weren’t going to immediately pack it in, I thought I’d go for a short jog and see how everything held together. I started off with a whopping 1km, a tiny distance by virtually anyone’s measure but nothing was hurting. I did that a couple times over the next week and still no pain. Instead of increasing the speed or incline on the treadmill, I left it flat, increased the distance to 2km & still didn’t have any pain after doing it a couple of times.

Between the second week of June and the end of the month, I jogged ten times across the month during my work lunch hours ranging in distance from 3km to 6km. Each time I go for a jog, I try to increase something, whether it was total time jogging, increasing speed, even if it was just for a particular interval. Given I’m at such an early stage of fitness with my running, I don’t think it matters too much what is increasing, just so long as something is improving or not going backwards.

My next goal is going to be a 7km run at lunch. 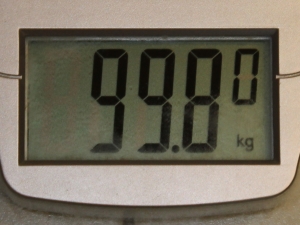 In my thirty odd years of existence, I’ve generally been in pretty good shape.

Fast forward to university and things were staying fairly on track for the first few months. I joined the University of Southern Queensland gym located at the Clive Berghofer Recreation Centre. It was the first gym that I’d really used with any sort of frequency and before I knew it, I’d put on about around 10kg of muscle and was knocking on the door of 100kg. As university life settled in though, there was a whole lot less sport, a whole lot of inactivity and a world of bad food and drinking. While I don’t know exactly what my weight would have reached while at university, looking back on some photos not so long ago makes me think it would have been 120-125kg.

When I moved to the Gold Coast in 2004, I didn’t join a gym initially however the fact that I was removed from the university lifestyle meant that I lost a little bit of weight and came down to around 115kg, not a small fry by anyone’s measure. Over the next couple of years I’ve walked of a morning on and off, used a couple different gyms that were close to where we were living and as a result I’ve had a fairly consistent and steady weight of 109-110kg.

While I wasn’t unhappy at that weight specifically, it was causing me other issues. For example, when going for a fast walk my shin muscles would get so sore and fatigued that I couldn’t even lift my toes to walk heal first. I also noticed that the ligaments below my kneecaps joining the top of my shin bones would get quite sore whenever I did high impact exercises, which was more of an annoyance than anything.

I think as a by product of playing so much sport as a youngster, I’m a fairly competitive person by nature. One sport that I have really enjoyed playing since moving to the Gold Coast has been squash. One of the key components to being a successful squash player, outside of hitting the ball well, is undoubtedly fitness and agility on the squash court. As my squash skills have improved over the last couple years and I’ve moved up in the squash grades, it has been getting increasingly difficult to win because I simply didn’t have the cardiovascular fitness or the agility to adequately compete – which frustrated me no end.

Around June last year I decided that I’d start keeping track of my weight on a semi-regular basis. I was surprised to find out that with the very limited amount of exercise I do and with virtually no care for what I was eating, that my weight seemed to hover around the 108-109kg mark.

I’m still not sure exactly what it was that triggered me to start tracking my weight, but I know if you don’t measure something it makes it that much harder to improve it. It turns out that like a lot of things, starting is the hardest part and committing to measuring my weight regularly made me accountable.

I’m happy to report that after doing nothing about my weight for so long, that I’ve made a start.