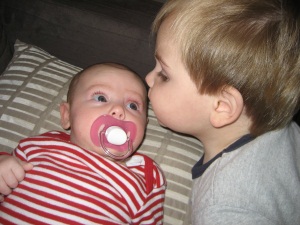 When arriving home from the hospital after Evie was born, the following weeks were fairly tumultuous. We witnessed all manner of outbursts from Hugo as he protested that we couldn’t provide him our absolute undivided attention.

It didn’t matter what we were doing, Hugo was determined he was going to make a statement – whether it was about going in the car, attending swimming lessons on a Saturday morning, picking up some groceries or going to the shops – there was bound to be an outburst.

In the last four to six weeks, that sort of behaviour has now stopped and in general terms our happy, easy going & tolerant son has returned from the post natal haze. That doesn’t mean that Hugo doesn’t throw a wobbly, he does – every toddler will but they are no where as frequent or severe which is great.

We’re now getting to a point where Hugo is genuinely interested in Evie. If Evie is on the her play mat for tummy time, Hugo will often come over and play beside her. If she is laying on the sofa for a few minutes, he will pop over and give her a kiss, poke her or lift up her shirt and say “belly button!”.

I think in the future, Hugo is going to make a great big brother.