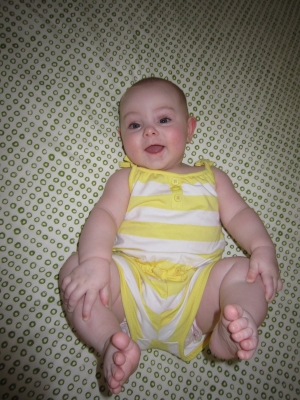 It has been a long while since I written anything about Evie, though I’ve had a number of items sitting in draft and haven’t managed to complete them.

In the two months since Evie was four months old, a lot has changed. In fact, it seems like every other day of the week Evie is learning something new.

As I mentioned in the last post when Evie was four months old, she was trying really hard to roll over but just couldn’t quite manage it and would get stuck half way. Since that was written, Evie can now flip herself over onto her stomach without any issues. Of course, getting onto the stomach was only half the problem – getting back took another few weeks to master but she eventually worked it out.

One of the other big changes has been her strength, Evie is pushing her stomach right off the ground. When Hugo was six months old, he wasn’t doing that yet, though that could be a by product of him being a little tank. None the less, we’d expected Evie to get up onto all fours in no time but it didn’t happen in that window – so we wait.

I’ll work my way through another draft and press the go button on a more recent post in the next day or two, stay tuned!