Emily turned forty on the 13th September and her partner Will decided that he’d plan some surprise birthday action.

As luck would have it, Groupon (a deal website) happened to be offering an amazing price on tandem skydiving by Jump the Beach and so the idea was born. Deals on websites like Groupon don’t last long, so you need to act fast to it is likely that you’ll miss the deal.

A flurry of emails from Will with comments like:

What Will didn’t realise at the time was, I’ve always wanted to go skydiving and while it was entirely unplanned as I was flying out to Bangkok the following morning at 6AM – what better time than the present!

We had good representation with seven family and friends mad enough to jump:

The plane can take 8 pairs, so to round out a full plane – we had a bloke named Prav who jumped with us as well whose birthday was the follow following day.

After signing our lives away with indemnity paper work, it was down to business. 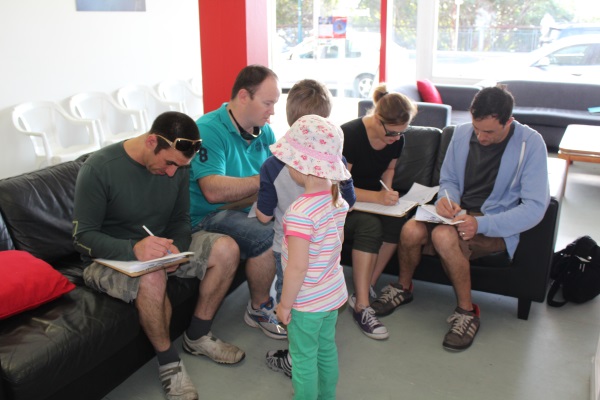 The group walked through to the back of the shop, laid out neatly on the floor were all of our harnesses which we were directed to stand behind initially. Since we were jumping from 14,000ft over the ocean, there was a chance that we might end up landing in the water – so before we could put our harnesses on, we needed to put on a life jacket belt.

Next up harnesses, step through the leg holes and have someone lift the harness up and onto your shoulders. I could imagine if novices were attempting to get themselves into one of these on their own, there’d be a lot of people getting tangled! 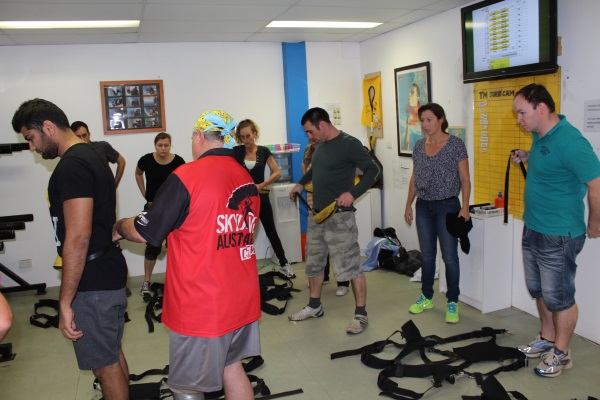 On a whiteboard everyone had already been assigned a tandem master. We were introduced to everyone and they got to work strapping everyone into their harnesses, turns out there are a lot of straps that need tightening – no one was complaining!

While everyone was getting strapped into their harnesses, another instructor took us through some safety procedures, spoke to us about the life belt we were wearing and also procedures within the plane and for the jump itself.

The instructor said as we jumped out of the plane we needed to cross our arms in an X over our chest or put a thumb under the opposite side hardness to keep everything in nice and close as we exited the plane.

Next we performed what the instructor referred to as the ‘lazy gorilla’ – arms above your head, elbows bent and back as far as possible while arching your back and keeping your head to one side. We all practiced the position a few times standing up, it must have looked quite funny to any onlookers.

Hugs, kisses , goodbyes for everyone and onto the bus to head out to the airport.

Fleur isn’t a fan of heights and definitely not a fan of skydiving, so as we got into the bus she had some questions for the nearest tandem master – which he was happy to answer. Best of all though, Fleur asked where and how the backup parachute works and with an absolutely dead pan face – he turned to her and said “did you pay the extra money for the backup?” – it was comedy gold.

It was a short drive in the bus from the Redcliff beach to the airport, taking about 10 minutes or so. When we arrived at the airport, we sat down on some seats and waited a couple of minutes for the instructors to organise themselves and then walked out onto the tarmac without instructors as they sorted out among themselves what order we’d go skydiving in.

The back of the plane was very simple, no traditional seats in sight and instead two long padded bench seats that we could sit with a leg either side on. Trudy lucked out and was sitting directly in front of the roller door on the floor but had a cracking view!

After we took off, it probably took about 15 minutes to climb to 14,000ft which provided plenty of time to really take in the view of the greater Brisbane area and since the skies were all but clear that day – the view was quite amazing.

On the front wall of the cabin area where we were all sitting, there were three coloured lights – red, orange and green. As we approached the drop zone, they progressively lit up until green meant it was time to go skydiving – yeehaa!

One thing that was interesting, it turns out that Redcliffe Airport is quite close to Brisbane International Airport and as such, controlled airspace. In practical terms for the skydiving plane, that meant that as we approached the drop zone – we had a limited amount of time to get everyone out of the plane, allowing the plane to do a u-turn and head back to Redcliffe Airport before they’d get the attention of the Brisbane International Airport.

The traffic lights inside the plane went green, we were over the drop zone – it was go time!

Trudy was sitting directly in front of the roller door and was first out of the plane, so had absolutely no time to think. The roller door was lifted, they spun around so they were feet first and whoosh, they were gone!

As soon as Trudy was out of the door, I began scooting toward the door on my bottom with the instructor directly behind me. It took all of about 5 seconds to get into position and at this stage I was still very relaxed.

The first time that it really hit home I was about to jump out of a perfectly good plane was when I put my legs out the door of the plane, as the wind hit them and pulled them abruptly to the side for a moment – remember we’re flying at about 150 knots (~280kph).

My instructor asked if I was right to go and I said “Let’s go!”. I crossed my arms, hooking my thumbs underneath the edge of a strap on my opposite side and with no more thought – we were out of the plane and skydiving!

I put my head back, arched my back and about 5 seconds later my instructor tapped me on the shoulder and it was time to use the lazy gorilla position we practiced earlier. Using this position helps to keep the jump stable, pulling in one arm or changing body positions disrupts the airflow and things get interesting (read: spins, flips, rolls, etc).

When you ride roller coasters with steep drops, you’ll often get a stomach sensation that feels like you’ve left it behind and a second or two later it catches up with the rest of your body. I was absolutely expecting that same feeling as we initially jumped out of the plane but it didn’t happen, not at all. I thought I might just have been lucky but when I asked everyone else that jumped, none of them got that sensation either and the tandem master I jumped with said it happens very rarely and as a professional he needs to purposefully make it happen.

I don’t know how the brain works but it is a truly incredible thing. Absolutely everything about jumping out of a plane is wrong, you’ve been told for your entire life to be cautious around heights in case you fall and hurt yourself. I was expecting my mind to be racing, maybe fearful or panicked and definitely loaded with adrenaline but I was shocked – within a second or two of jumping – certainly still while my arms were crossed – it all seemed very normal – it is anything but normal but that is how it felt – incredible!

While it was quite warm on the ground that day, jumping from 14,000ft – the air was considerably colder and having it rush over your body once you’re at terminal velocity – it is brisk but doesn’t last long.

Falling at over 200kph, the air blasting past your ears is quite noisy as well – it now makes sense why a few of the tandem masters were wearing silicone earplugs. It certainly doesn’t hurt or anything but if I went skydiving again, I think I’d consider jumping with earplugs just to make it more comfortable.

The view over Brisbane and Redcliffe while skydiving was absolutely incredible, you could see in every direction for what seemed like 100Km. The weekend we went the weather was meant to be questionable but Brisbane turned it on and we couldn’t have asked for more perfect weather – it was spectacular.

My instructor let me know he was about to pull the ripcord and deploy the parachute.

In the movies when you see people deploy their parachutes, it appears as though it is an instant air brake but in practice it is much more progressive than that. As you hear the chute deploy, you can certainly feel yourself decelerate due to the extra drag but it takes a few seconds for the canopy to fully inflate and while that happens progressively – you’re progressively slowing down until it fully inflates and then you slow very quickly.

After the really fast braking from the parachute happened, I was sitting lower on the body of the tandem master and he thought it’d be hard for me to reach the control handles. To rectify that, he put his legs straight and pulled his feet up hard so I could use them as a step to stand up, take the weight off my harness and tighten the straps so I was higher up and could more easily reach everyone – who would have thought you could do that while parachuting!

At this stage we’re still a few thousand feet off the ground and we get to relax and take in the sights. Now that everything is moving considerably slower and you’re a lot closer to the ground, there is a lot more time to really enjoy the view and simply chill out – it was a lot of fun.

Within a few seconds of the parachute fully opening my tandem master asked me to put my hands on the control handles. While we were both holding the control handles, he showed me how much force it takes to turn left, right, slow down and speed up. Once the instructions were done, all of a few seconds, he took his hands off and I glided around through a couple turns back toward our landing area.

By this stage it was time to get ourselves in a position to land, so my tandem master took control again and we started doing some really tight, fast spirals and we washed off a huge amount of height very quickly – as he pulled out of the spirals we lined up over the length of the beach and we were ready for our approach.

In the minute or two leading into the landing on the beach, my instructor went through the landing procedure with me. Instead of trying to land standing up, getting my and the instructors legs tangled and producing hilarious YouTube videos – they opt for landing on the bum instead. We practiced lifting our legs together twice as we approached the beach to make sure I had mine high enough and before I knew it – we were safely on the beach sitting in the soft sand!

Skydiving was without a doubt, one of the most incredible experiences I’ve ever had in my life. I mentioned it above, I can’t believe the skydiving instructors get to do this for a job but it really is amazing – so amazing I’d have driven directly from the beach, back to the airport and done it again.