I stumbled onto the video below of Muhammad Ali doing candid camera appearances in a classroom full of kids. By the looks of it the kids must have had some sort of task to do with Muhammad Ali and as they are sitting at the desk in front of the class talking about Muhammad Ali, he appears from behind them dressed in his boxing clothes.

The expressions on the kids face when the greatest fighter of all time appears in front of them are priceless. The last one is so fantastic, Muhammad Ali is essentially staring down the little boy, who is unafraid of his commanding presence and domineering body language and continues to talk to Muhammad as if they are sitting in a coffee shop.

On Sept. 3, 2012, James K. Flanagan of West Long Branch, N.J., died unexpectedly of a heart attack. He wrote this letter to his five grandchildren just months earlier and it is reprinted here with the permission of his daughter Rachel Creighton.

My wise and thoughtful daughter Rachel urged me to write down some advice for you, the important things that I have learned about life. I am beginning this on 8 April 2012, the eve of my 72nd birthday.

As was written in his obituary, James K. Flanagan “was proudly liberal and fought unyieldingly for the underdog. He was an accomplished author, poet, and seanchai — Irish storyteller; he reveled in recounting the joy of growing up Catholic in Jersey City and his adventures in the Adirondack Mountains and on the Western coast of Ireland. His greatest love was spending time with his family, most of all his five grandchildren Ryan (11); Conor (10); Brendan (9); Charles (8); and Mary Catherine (5).

In keeping with my 2011 blog statistics at the end of last year, following are my efforts for 2012.

Over the last few years, I’ve been aiming to break through the 100 posts per year marker. That obviously requires me to post around 9 times per month or at least twice per week. Despite it being in the back of my mind, I haven’t managed to push through that barrier yet and this year I stepped off the accelerator pedal a lot.

For those that are interested in doing the same, I’ve made the blogging statistics SQL script available for you to use.

In keeping with past years statistics, below is a quick summary of what web traffic looked like in 2012.

In 2011 my blog took 108,325 visits and 140,882 pageviews, while in 2012 it took 76,630 visits and 97,964 pageviews. Last year I was happy to see that the number of visits and pageviews were increasing, not to their highest levels when I was regularly blogging about technical topics but it was nice to see regardless.

This year however, something drastic happened in April and after digging into Google Analytics the first date that traffic plummeted was April 24, which was the date Google rolled out a new algorithm named Penguin. The Google Penguin update was designed to combat several different over optimisation tactics that are commonly used in online marketing to drive more visits from Google. Fortunately while I fell victim to the original update, I was given a reprieve in late May when Google made an update to their algorithm – though traffic never returned to the exact same levels before.

What is surprising to me is that I was penalised at all by the algorithm. I haven’t performed any search engine optimisation on my blog, aside from configuring a few common WordPress plugins that everyone uses and except for my commenting legitimately on interesting blogs online – any links to my website are 100% organic.

It comes as no surprise that Google still dominate the traffic to this blog, like they do to most websites around the world. Following on from last year, Google organic search continued to contribute ~78% of the traffic to the entire website. Bing & Yahoo! (which uses Bing from a search engine technology stand point) continue to provide a dribble of traffic, contributing just over 3% compared to 3.5% from last year. 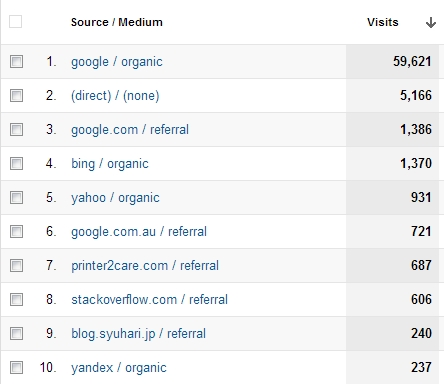 The most popular posts for the year were nearly identical to last year, however a technical post about an Oracle database error lost out in favour of a post describing how to get an old HP printer to work in Windows 7:

Of course when you ignore posts from prior years and only count articles written in 2012, it changes a lot:

I haven’t bothered to keep a close eye on the health of my blog this year and I’ve suffered as a result. Had I have been keeping an eye on things, I’d have noticed the significant decline in traffic toward the end of April and could have started to take action to rectify those issues. Of course, there is nothing stopping me doing it now either – so maybe I’ll spend a little time on some analysis to see what Google might be complaining about.

Lots of people I talk to get worried about their birthday and getting older. I’m not one of those people, to me I’m officially another year older but it doesn’t weigh on me at all. I don’t feel any different to when I was 25 years old, so I don’t see why I should let an arbitrary number have any bearing on things.

When I returned home, Claire took Hugo & Evie down to McDonald’s to get their weekend breakfast treat of pancakes. Once we’d munched through those, it was present time and I was spoiled with:

Mid morning we jumped in the car and ventured over to Sterle & Lorraine’s house for a barbecue birthday lunch. It served as a great way to bring all of Claire’s brothers, sisters, partners and kids together post Christmas and was really great to catch up with everyone again.

Thank you to everyone from Claire’s side of the family who drove down for a barbecue lunch and my family & friends who sent me an email, instant message, SMS or phoned me for my birthday – well wishes are always great.