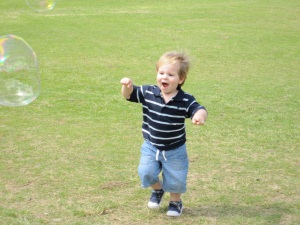 Last Saturday Hugo turned two years old and we celebrated in our usual fashion, beginning with presents first thing. After getting Hugo up, he ran down to to our bedroom like normal and was greeted with a red beanbag chair with a number of little presents piled on top of it.

After our early morning festivities were over and done with, we worked our way toward the Park Lake estate on Greenway Boulevard Maudsland on the Gold Coast. Beside Andrew Baildon’s Superfish Swim School, you’ll find one of the best family parks on the Gold Coast, with a mid-sized oval that is used for kids soccer, an abundance of play equipment for all different ages of kids along with a couple covered bench tables with electric barbeques. 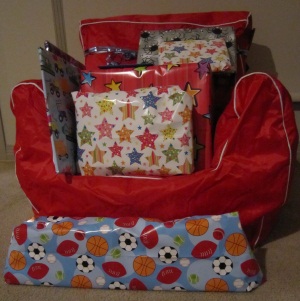 In attendance, we had Claire’s brothers, sisters and their other halves along with their respective kids. Also there were Andrew, Belinda & Ben, David and Karen, Lorraine and Great Grandma Colls and Kylie, who used to teach with Claire and Lucy.

While it was forecast to rain on Saturday and Sunday, we were very lucky. I arrived at the park at about 8:30AM to reserve a table for the party and it was overcast and a little windy. It continued to get darker and more threatening until at about 9:45AM, the clouds started to break and the sun started to shine! Someone was definitely looking after the weather, as it started raining lightly half an hour after returning home from the park.

Claire put her creative thinking and cooking hat on and decided that a barnyard theme would be fantastic. That led to the creation of a barnyard cake, complete with double doors, a loft and a thatched roof. No barn would be complete without animals and what animals are most common in a barn, well sheep, chickens and pigs of course!

Hugo was spoiled beyond belief by our amazing family and friends, with more than enough love to last until next year and so many presents that we’ve put some away for the moment. Oliver and Ben had a great time ‘helping’ Hugo with his presents, especailly when it came time to unwrapping them. It was pretty funny actually, birthdays aren’t normally a communal activity but when you’re only small – you don’t know any different and the three boys had a great time.

Thank you to everyone that was able to come to our little morning tea birthday party for Hugo, we really appreciate it. Hugo was absolutely abuzz for the entire day, which was just fantastic to be a part of.

See you all this time next year!