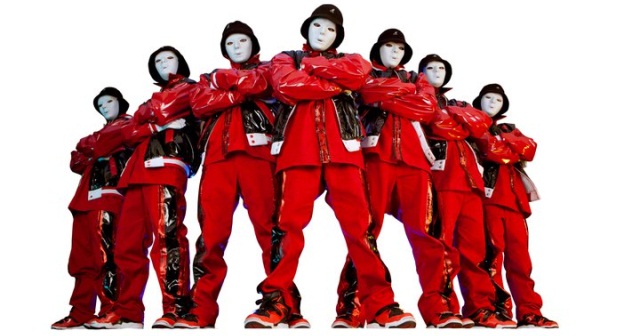 Last night Claire and I attended the opening night of Jabbawockeez at Jupiters Hotel & Casino in Broadbeach.

I was fortunate enough to get a pair of tickets from work for not only the opening night of their incredible dance performance but also the grand opening for the $20 million refurbished Jupiters Theatre. The newly renovated theatre now has capacity for 1929 seated guests or 2150 including standing room, which is double what it had before the renovation started in September 2011.

The night kicked off with one of the Jabbawockeez in a janitors uniform entertaining the crowd as everyone got seated, interacting with the audience and generally having a good time. Once everyone was seated Craig Peachey, who is the Acting Managing Director of Jupiters said a few words, welcomed all of the distinguished guests and then our newly elected Queensland Premier Campbell Newman said a few words before they were ‘swept’ off the stage by the janitor.

Jabbawockeez was the collaboration of three dancers from different styles, who joined forces to form a new style and group known as Jabbawockeez in 2003. They started out small in San Diego and Los Angeles but their big break came in 2006 when they appeared on Americas Got Talent where they took the place by storm and have been growing in popularity ever since. Jupiters Hotel & Casino have managed to get them from Las Vegas to the Gold Coast for the next five months.

One of the key features of Jabbawockeez, which is different to most other dance groups you’ll see is that all of the dancers are wearing the same clothing and have expressionless white masks on. Initially I thought it was a bit of a gimmick but with such a dynamic high energy performance, it really lets you focus on the dancing and not worry about identifying an individual dancer who just did something amazing; they are all amazing and you don’t know who did what amazing piece of the performance.

Claire and I absolutely loved the MÜS.I.C (muse-i-see) Jabbawockeez performance, which was directed by choreographers Tabitha and Napoleon of So You Think You Can Dance US fame. The music that the dancers performed to was fantastic and ranged from Queen to Prodigy and everything in between. The new state of the art sound system in Jupiters Theatre was absolutely pumping. While the music was loud, the thing that really hit home, literally, was the incredible bass; bone shaking!

If you’ve got an opportunity to see Jabbawockeez in the next few months while they are here in Australia performing at Jupiters Gold Coast, I’d definitely recommend it – they were fantastic and well worth your time and effort!

This evening I was fortunate enough to see the world acclaimed Phantom Of The Opera at the Lyric Theatre in Brisbane.

I say fortunate, as I some how managed to receive a ticket on the back of a birthday present for Claire from her parents this month. It was pretty awesome actually, as Lucy and Michael wanted to go and see it another time so there were four excellent seats beside one another. Claire and Lucy had seen Phantom Of The Opera three times prior, Michael had seen it once before recently, while this was my first experience.

I don’t know how to describe it accurately enough to do it justice, other than to say that the detail in the set was incredible, the costumes are great and Anthony Warlow has a truly magnificent voice. The female lead for Christine was played by Ana Marina, who I thought had an excellent voice. There is a schene toward the start of the first act, where The Phantom is yelling at Christine to sing for him; it gave me goose bumps!

The show is only on until the 27th April 2008 in Brisbane, so if you can still get tickets to it – I would highly recommend it.

The 2007 Australian Record Industry Association awards were held last night, which are always great. I’m always impressed with the diversity of music produced by Australian artists and the 2007 ARIA awards night really highlighted that fact with acts like:

Of interest out of that list where Operator Please, which are a young band with an average age of 16 who won their way through via a battle of the bands. The Hilltop Hoods hail from Adelaide and offer a unique R&B sound. Gotye, largely a one man band provide electric, synthesised music blended with traditional sounds. Kate Miller-Heidke, well – she was just strange, querky and different but excellent none the less.

The highlight of the night for me though was watching John Butler Trio supported by Kieth Urban perform. While it wasn’t quite the same as a typical live performance from the John Butler Trio, there were hints of the brilliance which the audience realy appreciated.

The John Butler Trio are currently on the Australian leg of their Grand National tour and we were lucky enough to see them.

The concert was held at the Brisbane River Stage last night and the event was sold out; which officially made it the single biggest crowd in the bands history that they’ve performed in front of world wide; go Brisbane.

The evening was fantastic, with the John Butler Trio playing all of the new songs from their Grand National release with every second song being an older one. The Trio played from about 7:30pm until approximately 10:15pm with no breaks other than for us to applaud for an encore!

Such a great band, you need to do yourselves a favour and go and see them next time they are in your neck of the woods.

After battling with Ticketmaster for twenty or thirty minutes trying to complete the ticket purchase, my John Butler Trio tickets arrived today. Claire and I are going to see John Butler Trio again, this time at the River Stage in Brisbane and can’t wait!