Every once in a while, I go through this site and perform some general housekeeping and website maintenance work. The last time I performed a big chunk of maintenance was back in 2008 when I went through and consolidated about 25 categories and subsequently re-categorised a huge number of posts.

The time has come again, this time it is to do with the how I format images within posts. Back in the earlier days of this site, I used a custom image formatting setup which looked quite cool but is less practical. With the more recent versions of WordPress, I just want to be able to use the WYSIWYG editor and focus more on writing and less on the formatting issues.

I’ve got about 80 or so old posts to go through and do a little tidy up on, so I’m thinking I might have it done in dribs & drabs by the end of the week. 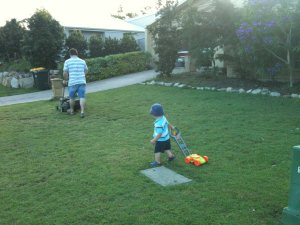 This afternoon Claire mentioned on facebook that she loves watching Hugo and I do things together, in this instance it was Hugo helping me mow the lawn.

A friend asked if Claire had a photo and I was going to link to an old post of this photo but for the life of me, I can’t find it – so I apologise if I’ve posted this before.

This is an old photo taken in April 2010, so Hugo was just a little fella then and Evie wasn’t born yet – seems like a lifetime ago already! 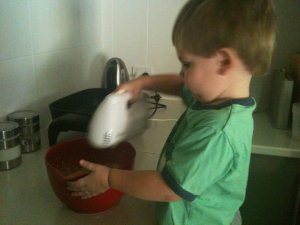 Hugo loves to be involved, it doesn’t matter what we’re doing; it could be gardening, vacuuming or grocery shopping -he just loves it.

One of his new favourite things to do is help Claire when she is cooking or baking. We need only say the word ‘cooking’ and Hugo will go and drag one of the dining room chairs over to the bench and stand up in anticipation!

So far Hugo has helped with pikelets and chocolate chip biscuits. He has learned a few skills of the trade as well, he can help crack eggs, is great at holding measuring spoons, knows how to ‘tap’ measuring spoons and cups to empty them out, can stir with a wooden spoon but most of all he loves to use the electric beater.

Like any good cook, he also appreciates tasting throughout the whole process! 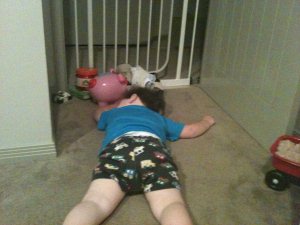 Since Hugo was a baby, he has had a little bull plush toy named Boris.

Originally, Boris was just a sleeping aid for bed time but little bit by little bit was allowed out of his cot until Hugo took Boris everywhere with him around the house & in the car.

When Hugo upgraded from the cot to a big boy bed, we noticed a peculiar behaviour – he wanted to bring other things with him into bed such as a favourite toy car.

Now that Hugo can get out of bed, he regularly selects favourite items from around his bedroom to have in his bed with him at night time. At the moment those toys are a pink money box pig, a plastic container with a bunch of cotton reels and string, a wooden toy bus and a plastic motorcycle police officer.

Hugo also gets out of bed at night time and sleeps by the door of his bedroom on the carpet. Before the new behaviour started, it was just Hugo and Boris – however now that he has treasures, they have to come to!

While visiting Andrew & Belinda a while ago, Hugo stumbled onto one of his cousin Ben’s toys – a radio controlled car. Hugo hadn’t seen one before and thought it was the best thing since sliced bread. We’ve been looking for one similar but they’ve been sold out at the big department stores like Kmart until Claire chanced upon the last one on a shelf yesterday. Hugo still has some learning to do with the controls but is having a blast none the less!

Having trouble viewing the embedded video above, watch Hugo Lattimore Playing With A Radio Controlled Car on YouTube.