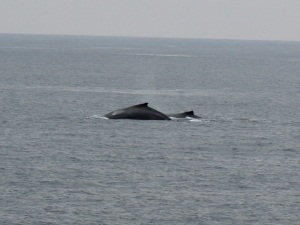 Friday morning I had the pleasure of going whale watching on the Gold Coast broad water with a group of work colleagues.

The whale watching tour was run by Tallship, we needed to arrive at the terminal for boarding at around 8:00AM and we departed from Marina Mirage at approximately 8:30AM.

After we set off, it only took a few minutes driving north through the canals before our whale watching host was telling us about different birds that were resting nearby and interesting facts about each one, which I thought was great. Soon thereafter we turned right at Wave Break Island and started towards the Gold Coast seaway. On the southern side of the seaway you have Gold Coast Spit and on the northern side of the seaway you have the southern tip of South Stradebroke Island. It was a little rough as we moved through the rock walls of the Gold Coast seaway but it only lasted for a few minutes and then it was smooth sailing.

We continued cruising out into the open water for five to 10 minutes and before we knew it, whales! I’d assumed that during the migration period that the whales pack up shop and start making their journey north, but it isn’t quite that straight forward. They leave in stages based around their age, we were seeing the middle group which were around 12 metres in length. In the next month as the whale watching season comes to an end, the largest of the whales will make their way north past the Gold Coast and are in the 16-18 metre territory.

There are rules and regulations governing how the sightseeing tour operators behave around the whales, such as only being able to go within 100 metres of them so they don’t feel pressured/crowded. It turns out that whales are a curious creature and once the boats come to a stop – if the whales happen to swim right up next to the boat – that is not a problem. In fact, the host was telling us that last week people missed their flights home because the whales were swimming around their boat for 2.5 hours straight and they couldn’t start their motors!

The whale watching tour went for around three hours and in that time, we saw countless pods of whales. Most of the pods were in groups of two or three but the host said from time to time, they see super pods which have over 10 whales in a single group which would be an incredible sight to behold.

Unfortunately we didn’t get to see any whales breaching (ie, diving out of the water and crashing back down) but we did get lucky enough to have a whale swim right up beside the boat, roll over onto his back so we could see his underside as he gracefully glided past the boat and disappeared back into the deep water again.

It was an amazing experience to see the whales in person up close and personal. If you’ve got a morning free over the next month, I would highly recommend you take the time to get out and see them, it’ll be an experience to remember. 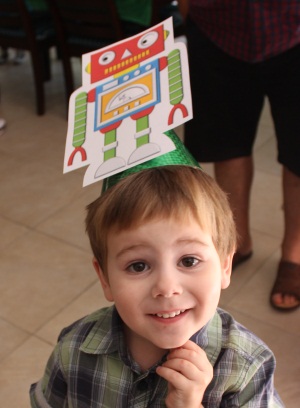 Hugo turned a whopping four years old last Tuesday and he has had a great week of celebrations.

His birthday started off in the usual fashion, we opened presents in the lounge room first thing. It wasn’t open season though, we had to get Evie up first so she could ‘assist’ with the present ceremony. We sat around on the lounge room rug while Hugo worked his way through a little pile of presents, some big and some small. Among the presents in the morning was a see-saw, Lego fire truck, double loop Hot Wheels track that didn’t need batteries including two new cars, Lego stationary holder, Wii steering wheel, The Gruffalo DVD, a wooden tea set and some gardening tools. 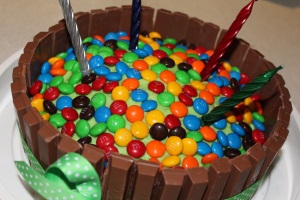 Sterle, Lorraine and Jean popped over in the afternoon and Hugo was spoiled again with some wonderful presents, a particular favourite is an amazing electric keyboard just like Grand Dad Sterle has. Since it was Hugo’s birthday, he chose McDonald’s for dinner – not our collective favourite but then again, it wasn’t our birthday – which was followed by birthday cake!

Later in the week, Hugo celebrated his birthday again when he attended Kindy. Hugo was pretty chuffed about the whole celebrating his birthday twice and there was more sweet treats consumed. 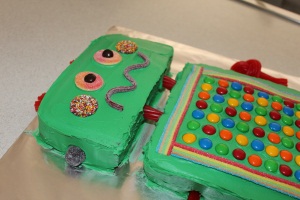 The major shindig was on Sunday morning, where we had George, Jude, Sterle, Lorraine, Jean, Nigel, Trudy, Noah, Anita, Emily, Will, Oliver, Mila, Lucy and Michael arrive for the festivities.

Hugo had decided that this year we should have a robot theme with a mix of space stuff. The hanging items went by many names but Hugo decided that he would call them planets, I’m okay with that. This was accompanied by a selection of his favourite foods like kiwi crisps, M&M’s, Cheezels and much more. Claire did an amazing job of organising, food and decorating as usual with Happy Birthday Hugo on the wall and groovy robot party hats; Evie is still wearing hers around the house three days later!

There were so many fantastic presents from family that I don’t know where to begin and the list is far too long to list out, so I’ll just say a massive thank you on Hugo’s behalf. Hugo is a loving little man and gets very excited about our extended family get together’s. He loves seeing all of his grandparents, uncles, aunties and cousins, especially since that means he gets to play with everyone.

I can’t believe next year he’ll be a five year old, look out world!

Alexander Polli is an extreme athlete who loves skydiving but is part of an elite group of skydivers who jump in either a wingsuit or a tracksuit.

Skydiving wingsuits have fabric between the arms and legs like a sugar glider and also between the legs, allowing the skydiver to easily control his or her movement in the air. Skydiving tracksuits are basically what they suggest, special tracksuits that fill with air and provide less control than a wingsuit but more than a standard skydiving outfit.

Of course human ‘flight’ in a wingsuit is all well and good but to keep the adrenalin pumping, this group of extreme athletes are doing something known as proximity flying (wingsuit) or tracking (tracksuit), where they fall with style very very very close to things with little room for error.

If you’ve never seen footage of proximity flying in a wingsuit before, the video below will blow your mind – especially where Alexandra is narrowly missing the tops of mountains, tracking just above a treeline over top of a road.

Prepare to be amazed!