Following on from the last installment of Danny MacAskill’s Way Back Home and his unbelievable mountain biking, we have his latest video Industrial Revolutions.

The balance Danny has is honestly hard to comprehend, watching him ride along the length of a railway track and doing a 180 spin to land on the opposite track is amazing, though topped by bouncing along the metal ribs on the top of an old train carriage which was blown out of the water by riding along a wobbly steel cable! 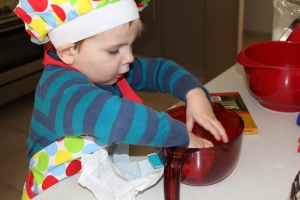 I’ve mentioned countless times before that Hugo loves to help and be involved in the various activities that happen in our household and one of those activities is cooking!

Hugo certainly doesn’t need to be incentivised to take part in baking chocolate chip biscuits or making pikelets, however with his new chefs hat and apron he sure does make a cute mini MasterChef.

A few other action shots:

Evie has been thinking about walking a lot recently.

For Evie’s first birthday, she received a walker with adjustable breaks to give it some resistance so it didn’t scoot away. We never bothered with a toddler walker for Hugo and he learned to walk without a problem, so I wasn’t sure if it was really going to make a difference. However, to my surprise, as soon as we convinced Evie to stand on her own holding onto the walker, which she was very nervous about, she relaxed and soon tried taking her first steps with it.

Within a short few days, those tiny little first steps turned into her hooning up and down our living room. Of course she couldn’t steer and has no concept of stopping once she got her momentum up but that is what walls and couches are for afterall.

Evie’s use of the toddler walker was actually quite short lived and before we knew it, she was taking those same tiny, shuffling steps unassisted. Naturally as soon as she took a handful of shuffle steps, enough to move 10cm, she would sit back down. Claire and I were willing Evie to take bigger steps and then more steps, which seemed to peak at 8 steps for a few days and then a light bulb went off for her – if she doesn’t sit down, she can just keep on going like the Energizer Bunny!

Since the video above was filmed a week or so ago, Evie has nearly stopped crawling completely and is instead, walking around constantly. Looking at her expression as she cruises around the house, it is quite clear that she is as proud as punch that she can walk. Most importantly I think, she can keep up a little easier to her big brother Hugo – who she absolutely adores.