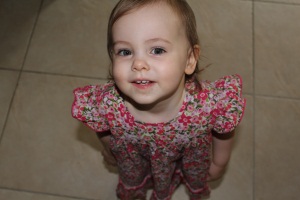 Over the last couple of months, Claire and I have been adjusting Evie’s bottles.

According to the formula, her age and weight she was meant to have two 250ml bottles a day however that rarely happened and she seemed more comfortable with around 200ml.

During September we thought it was time that she moved on from formula and onto cows milk so we made the switch. Of course that didn’t go down all that well, so we reverted to formula and started weening her off it by reducing the amount of formula per bottle from four scoops to three and then to two.

While all this was going on she was quite inconsistent with her bottles as well, sometimes she was drink all 200ml and want more and the next time she would protest after 50ml. As we got down to two scoops of formula in 200ml of milk, we thought it made sense to reduce the volume down to 100ml as well.

Not that long after we were down to a single scoop of formula, started introducing cows milk and Evie was happy as a lark. Next we stopped adding the scoop of formula all together and Evie didn’t seem to mind to much but another month or so later and she decided that she’d had enough of the bottle all together.

Claire and I miss giving Evie her bottle but they can’t stay little forever. Now we give her a sipper cup with milk in it and she is happy to drink smaller amounts of that periodically throughout the day and in the evening after she has had a bath.

Now it won’t be long before she is out of the cot and into a big girl bed!